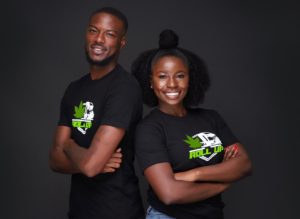 Many advocates have been extolling the value of giving minority entrepreneurs a license in the adult-use cannabis market in the abstract. Roll Up Life, though, is a concrete example where that could become true.

“The gaps in the market presented a huge opportunity for me to create something that would be profitable and sustainable while creating an opportunity for people who look just like me,” said CEO Tiyahnn Bryant.

Their Chief Operating Officer, Precious Osagie-Erese, is a former TV news journalist who joined her childhood friend Bryant’s company. Both were raised and currently live in East Orange, NJ.

Bryant has been working on the idea for the company for three years. When he approached Osagie-Erese to join him, she initially said no. With a background in marketing and sales, as well as journalism, her skills complemented his.

She said when their site and app is up and running, it will be similar to the app Grubhub.

“Delivery is going to be the thing that connects the industry,” Osagie-Erese said.

Roll Up Life did a soft launch of the company by beginning to ship Best Buds CBD last month. They are now delivering a variety of CBD products in the beta phase of the company, testing to see what works and what does not.

“We’re very confident in how we built the company,” Osagie-Erese said.

Companies selling THC and CBD products can partner with them and sell their products on rolluplife.com, which will bring an Amazon-like platform to New Jersey. Customers can discreetly shop for the products they want and will have access to hundreds of different brands from various locations.

Roll Up Life wanted their platform to be active to show they have established a working model that can easily adapt to adult-use cannabis.

They have found that many people do not understand the nuances of CBD. Thus, Osagie-Erese wants to work on spreading information on its health benefits.

“That educational aspect is gonna is to be an important wing of our company,” she said.

There is certainly a great need for home delivery of cannabis, Osagie-Erese noted. The NJ Department of Health allowed for dispensaries to submit plans for home delivery earlier this year. However, the companies have yet to do so.

Osagie-Erese noted that currently, medical cannabis demand obliterates supply, so dispensaries are likely not eager, nor are they incentivized to set up a home delivery system.

The Value of a Home Delivery Cannabis Business

They want to be the first African American-owned cannabis delivery company in New Jersey once the adult-use market opens.

“We just want to be given the opportunity,” Osagie-Erese said.

Roll Up Life seeks to deliver to customers throughout New Jersey in terms of delivery. They are currently only delivering by courier in Essex County. All other orders are being shipped by mail, which they can do with CBD Osagie-Erese noted.

People usually can receive their order the next day.

Their site will encourage people to order from a local dispensary. Eventually, the company will have regional drivers around the dispensary locations. For those seeking a specific strain from a dispensary that is a bit farther, they might have to pay an extra delivery fee.

Some packages will be shipped rather than delivered.

She noted that since some towns in New Jersey have been eager to opt-out of a brick and mortar, they cannot prevent companies’ deliveries from out of town. That gives them a prime opportunity.

“We’re excited about that,” she said.

However, raising capital has indeed been difficult they have found.

Preparing for the Adult-Use Cannabis Market

“We’re very excited about its passage,” Osagie-Erese said about the adult-use legalization.

“People are really excited for THC deliveries,” she said. Osagie-Erese noted that a lot more education has to be done on CBD and its health properties to make it known in many communities.

“I really want to be at the head of that and want to do it right,” she said.

They have been closely following the process. Bryant and Osagie-Erese testified at the Assembly Appropriations hearing.

“We’re gonna be that infrastructure that really supports the canna industry,” Osagie-Erese said. She noted during the hearing that the Chair, John Burzichelli (D-Gloucester, Salem), said delivery logistics would be very important.

They are especially concern about the reentry of felons into society and the expungement of their records.